We're sorry but the candle you have selected is currenty in the process of being purchased or has just recently been purchased.

Please feel free to select another candle or check back in 15 minutes to see if the candle you have selected has been released for purchase.

We're sorry but there are no candles available for lighting.

You have already begun a candle purchase session. If you would like to continue with your current candle choice please click "Continue" otherwise please click "Select Another".

In Memory of
George Rutherford
Kraft
1916 - 2016
Click above to light a memorial candle.

The lighting of a Memorial Candle not only provides a gesture of sympathy and support to the immediate family during their time of need but also provides the gift of extending the Book of Memories for future generations.

In the event that there is an error
in the information presented,
please contact the funeral
home by clicking here. 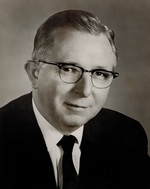 George Rutherford Kraft, 99, of Crossville, Tennessee passed from this life Friday, November 11, 2016 at his home.

George Rutherford Kraft was born to Gustav Eduard Kraft and Martha Adeline Rutherford on December 14, 1916 in New York City. His parents were highly accomplished individuals. Both spoke multiply languages. His father was a skilled watch maker, and a concert violinist who graduated from the Conservatory of Music, Leipzig, Germany. He was a wounded veteran serving with Teddy Roosevelt in the Spanish American War. His mother was a registered nurse who held a master’s degree in physio-therapy.

George was veteran of World War II. He was awarded two battle stars and a presidential citation. While stationed overseas, he was fortunate to use his talents as a musician playing both the clarinet and alto sax in the army jazz band. In 1950, he earned a bachelor’s degree from the University of Rochester. After graduating college, he obtained a job with Baxter Laboratories, a pharmaceutical and hospital supply company. During his 22 years with Baxter, he rose to the position of regional sales manager for mid-Atlantic states.

George was married twice. He married his first wife Rose Diane Comella, a registered nurse, in August, 1937 at the age of 20. He remained married to Diane for 26 years until her death in 1963. He remarried in 1966 to Dr. Erma Buckman Miller, also a registered nurse. He was married to Erma for 46 years until her death in April, 2012. After Erma’s death in 2012, George moved to Crossville, TN to be next to his daughter. He is survived by his daughter, Lorie Diane Kraft Smith and her daughter, Olivia Diane Smith.

George was a 32nd degree Mason receiving that distinction in 1953 at the Mission, Kansas lodge. He also became a Shriner in the Columbus, OH lodge, and is a life member of the Valley of Columbus. During his lifetime, he had an active interest in boating and was a member of the U.S. Power Squadron. He was a past commander of the Vero Beach, FL Power Squadron the city where he retired to in 1973.

To send flowers to the family or plant a tree in memory of George Rutherford Kraft, please visit our Heartfelt Sympathies Store.

This Book of Memories brings those affected by loss together by encouraging communication and self-expression. By giving friends and family a special place to tell their stories and express their feelings of loss, it helps them care for one another during a very difficult time. Click on any of the links to the right to access features or information within this memorial website.